No Wednesday Word today, as I’m stumped for a word I want to talk about this week. Probably because I’ve been feeling a bit at a loss for words in general.

Yesterday, I met my agent, Kevan Lyon of the Dijkstra Agency, face-to-face for the first time. She’s every bit as lovely and smart in person as on the phone and in email, and I really enjoyed getting to know her a little better. Of course, it’s pretty hard to dislike anyone who loves your work!

Last week, I sent her blurbs and the first 4,000 words of the sci-fi/futuristic series that’s been rattling loudly in my brain. I was pretty worried about her reaction to it, because while I think the idea is fresh, unique, and interesting, it’s also a little far out. She agreed it was all those things, and admitted it might be hard to find the right market for, but she still encouraged me to continue it at least to the proposal stage, at which point, she’d try to shop it and see what we got.

I obviously shouldn’t be doing anything until I finish the two unwritten novellas for my Kensington anthology, but not being sure what I’d be working on next was taking up a lot of space in my brain. Kevan didn’t really make any suggestions for a plan of attack, but after we’d discussed everything, I found I was able to come up with a prioritization schedule that looks something like this:

After we get the sci-futuristic out on proposal, I’ll decide what to write next based on what happens with the option book. If Kensington contracts it (or it sells elsewhere), then I’ll write that. If not, I’ll complete my first person single-title contemporary instead.

I’ve read Ropers Rule and let me say, it rocks. Amie’s a master (mistress?) of packing a lot of story into a small space. She has a spare but eloquent style, and I admire her writing immensely. Oh, and it doesn’t hurt that the sex scenes are inferno hot! And then there’s the gorgeous cover: 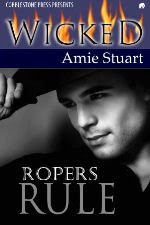 Seriously, what’s not to love?

For a chance to win a free copy of Ropers Rule or any of the other new releases this week, hop on over to the chat room on Friday starting at 8pm Eastern time. It’s always a blast and, who knows, you just might meet some new authors whose work you’ll adore!