Got into a brief conversation this morning on Twitter about why I can’t be arsed to read or care about the Twilight books. Basically it comes down to:

1) I’m not a big fan of vampire books/mythology to begin with (although I do love Emma Petersen’s vampires, but that’s because I love anything she writes!).

2) I find the idea of a hero and heroine who have to be stunted at age 18, both physically and emotionally, to have an HEA unappealing.

But that’s not really the subject of my post. Because it dawned on me that while I can find sexy young men nice to look at in a distant sort of way, I’m not nearly as attracted to men in their late teens or twenties as I am to men in their forties and even fifties. Almost all of my favorite TV shows feature male leads who are on the older, scruffier side. (The primary exception to that rule is BURN NOTICE, whose Jeffrey Donovan is neither old nor scruffy, but it has Bruce Campbell in the wonderful supporting role of Sam, and if he’s not older and scruffier, I don’t know who is, lol.)

I’ve also realized I like them odd. Just a little off. Not quite normal.

For proof of my peculiar tastes, I offer the following as my two favorite leading men, bar none: 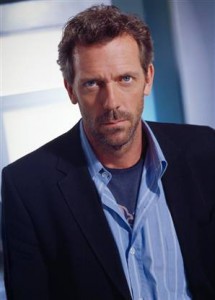 I’m embarrassed to admit that I completely ignored House for its first two seasons on TV because I didn’t realize that the irascible Dr. Gregory House was played by none other than Hugh Laurie. (It was the flawless American accent that confused me, I swear!)

I’ve loved Laurie practically forever, having never missed him in Black Adder (an absolutely hilarious, must-see series for any British history buff) or Jeeves and Wooster, or any of a half a dozen other Britcoms he appeared in over the years. (One of my favorite bits is of him and Stephen Frye doing “Are You Being Serbed.” Slayed me.)

I have to admit, though, that I never fully appreciated the brilliance of his acting until I saw House. It’s quite a feat, in my opinion, to make such a selfish, unlikeable character so sympathetic and to imbue him with so much humanity despite all his unpleasant characteristics. (I just hope the show didn’t jump the shark this last season with his descent into hallucination. I was very disappointed when I discovered a lot of what happened toward the end of the season wasn’t real.)

What about you? Got any favorite leading (or supporting) men you think others might find a little “odd?” I’d love to hear.

6 thoughts on “TV Tuesday: I Like My Men Scruffy and a Little Odd”