Tomorrow marks the one-year anniversary of my entry into the world of self-publishing. I began this journey as an experiment, with low expectations and merely the hope of recouping my own costs. 365 days later, I’m pretty well sold on self-publishing as a good business decision for me, although 2012 will truly be the make or break year for me.

Since I’ve always been pretty open about sales figures and money, though, I thought it was time for a recap, complete with graphs and charts (because yes, I’m a geek) and (gasp!) actual dollar figures.

So, without further ado, here’s a chart of total sales of each book: 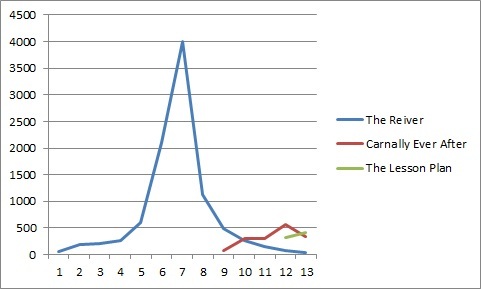 A little explanation–the chart runs 1-13 because it covers January 18, 2011 to January 17, 2012. Paying sales of The Reiver came to a virtual standstill when it went free on Amazon US in November. It’s still picking up paying sales from Amazon in other countries (although it is free in Spain and Italy, it is still not free in the UK, Germany, or France–don’t ask!)  as well as a few a day from B&N, where people don’t always seem to notice that there’s a free alternative to the 99-cent one. (I didn’t take the 99-cent one off B&N because that would have taken down the free one at the same time; again, don’t ask!) Obviously, Carnally Ever After and The Lesson Plan have no sales figures prior to the dates on which they were released (in September 2011 and December 2011 respectively). None of these number are quite final yet, since January sales figures aren’t in for any of the retailers I distribute to through Smashwords, but they’re not off by much.

So, what’s the deal with that big spike in sales of The Reiver over the summer? Honestly, I haven’t a clue. I’ve yet to figure out why that story took off the way it did and I’m nowhere close to repeating that kind of success–although The Lesson Plan‘s sales have picked up dramatically over the weekend, so it maybe it’ll take off…but who knows?

Next, let’s do sales by retail outlet, because I know you’re curious about that, too: 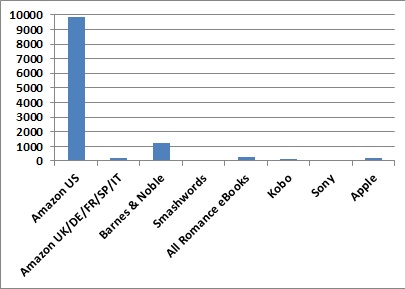 Obviously, Amazon US blows all the other retailers out of the water, but if we subtract those two summer months when The Reiver sold like gangbusters, I sell about 5 copies at Amazon for every 1 at B&N and about 10 for every one at All Romance eBooks. Most of my Apple sales have been in the past three months, so it’s difficult to say how the iBookstore will compare to the other retailers going forward, since before then, I sold almost nothing at Amazon (although The Reiver has been free there for quite some time and was–and may still be–in the top 10 list for free historical romance).

Okay, now what you really wanted to know–the money! 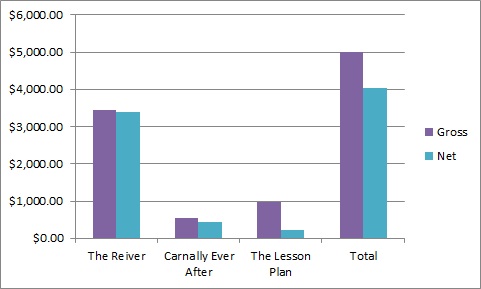 Things to notice here–The Lesson Plan has earned almost $1,000 in sales, but it cost me almost $800 to publish it (including my advertising budget). Because The Reiver and Carnally Ever After were rereleases of previously edited/published stories, the only thing I had to pay for was the cover art. I didn’t purchase any ad space for them, either. I also decided not to invest in my own ISBN numbers for rereleases, only for originals, so I didn’t have that expense with either of the first two books. Technically, the ISBN number cost me $250 up front, but since I get a block of 10, only the one used for The Lesson Plan is actually counted in its expenses.

So, how does this compare to what I’ve earned from the books I sold to “major” publishers–those being Kensington and Harlequin? Well, Kensington paid me a $2,500 advance for Behind the Red Door. Since then, I’ve received three additional royalty payments of roughly $800 (I’m guessing, so don’t hold me to that figure), for a grand total of $3,300. And that is over the course of three years (from signing the contract in 2008 through to the end of the last reporting period, which was June 2011). Harlequin paid me $800 each for Grace Under Fire and Taking Liberties. I’ve only received one statement from them so far, and although Grace had sold about 1,500 copies in the first two months it was in release, that was not enough for me to earn out my advance. Both of those advances were paid in 2010.

Please note that I’m not trying to make any claims here as to the outcomes for the self-publishing for anyone but me. Moreover, my results are fairly modest. Setting aside those huge summer months, my earnings wouldn’t be nearly so impressive. In those two months, I earned about two-fifths of what I made for the whole year. Without that bubble, I’d be closer to my total payout from Behind the Red Door. That would probably still be enough for me to feel I’d been fairly successful at self-publishing and to continue to pursue it, but it might not be the results other authors are looking to achieve. At the same time, I’ve managed these modest results with relatively little expense or promotional effort, and I was hardly a household name before I began and am not all that much closer to being one now.

The number that has really convinced me to keep going, though, is this one:

My main goal isn’t to maximize profit (except to the extent that making enough money from my books might someday allow me to quit my day job so I could write even more of them), but to get to readers. And for the first time, I really feel I’m achieving that latter goal.

5 thoughts on “A Year in Self-Publishing”