And thanks to my dear friend Tessa Dare (whose fabulous debut novel, Goddess of the Hunt, will be released by Ballantine in July of 2009), I am pleased to announce that Behind the Red Door is now available for preorder at Amazon.

My bud Amie Stuart dug this up for me this morning:

I know, it’s pixellated and black and white, but OMG, swoon…it’s GORGEOUS. Can’t WAIT to see the “real” thing!

It really is true that there’s no rest for the wicked! Every time I feel I’m getting caught up, something like this happens: 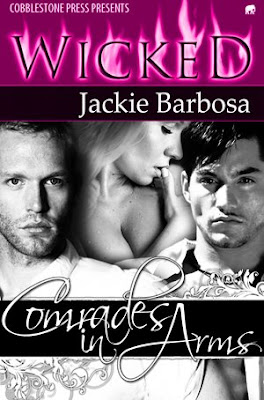 That’s right, Comrades in Arms was released yesterday by Cobblestone Press to much fanfare, tooting of horns, and throwing of confetti. (Okay, maybe I exaggerate a little. I didn’t actually see any confetti being thrown.)

I have to admit, this was an extra exciting release day for me because I shared it with none other than the legendary Piers Anthony! Let’s face it, that is pretty darned cool. For the whole story of how Anthony came to contract his own Wicked with Cobblestone Press, check out his post on the Cobblestone Authors blog. It’s very interesting reading.

Okay, so that’s the new release news. Since I last posted writing news, I’ve also signed the contracts for my Cobblestone 12 Days of Christmas novella, Unwrap My Heart. No cover art yet, but I promise to be prompt in doing so when I receive it.

I like to think of the plot of Unwrap My Heart as It’s a Wonderful Life in reverse: instead of finding out awful life would have been if she’d never been born, my heroine finds out how wonderful her life could be had she made some different choices. Here’s the blurb:

Holly Ackerman has scratched and clawed her way into the position as an anchorwoman at a local TV station, but along the way, she’s passed up marriage and family. Now, on Christmas Eve, which is also her forty second birthday, she can feel all she’s worked so hard to achieve slipping away. When an unbelievable encounter with a very real Santa Claus gives her a second chance at love, she must decide whether to give up her hard-won past for a storybook future.

I really enjoyed writing this story, which pestered me for months before I finally had the time to put it on the page, and I hope you’ll like it, too. I don’t have a precise release date, yet, but I know it will be sometime between December 12 and December 23.

With everything that’s going on these days, I’ve decided it’s finally time to break down and do a quarterly newsletter. I haven’t exactly been resisting it, but I’ll admit that the logistics had me a bit bamboozled. But having chatted with some other writers who do regular newsletters, I think I’ve got the basics down.

As an incentive to sign up for the newsletter, I’ll be entering all the names I get before the end of the month into a drawing to receive a free copy of either Comrades in Arms or Unwrap My Heart (winner’s choice).

In addition, everyone who signs up before Christmas will receive, free of charge, the Twelve Days of Christmas Anthology collected and edited by my dear friend Leanne Karella (who doubles as Anna Leigh Keaton). The anthology features twelve short, romantic stories by a wonderful slate of authors:

Oh, and of course, yours truly.

So, use that button over there on the right hand side of the page to hurry and sign up. Remember, if you join by the end of November, you’ll be entered in a drawing to receive your choice of Comrades in Arms or Unwrap My Heart, and everyone who enters before Christmas will receive the free anthology.

Last, but certainly not least, I want to mention that Wickedly Ever After will go off sale at the end of next week (or a few days thereafter). The novella will be the first in my Kensington anthology, along with two new novellas titled Scandalously Ever After and Sinfully Ever After. So, if you don’t buy it from Cobblestone Press before the end of the week, you won’t have a chance to see it again until June of 2009! Hurry, hurry, hurry!

I usually shy away from posting political commentary on my blog, but in the wake of Tuesday’s historic election, I can’t keep my thoughts to myself.

First, I am beyond thrilled by Barack Obama’s victory. As a lifelong Democrat who doesn’t think “liberal” is a dirty word, I’m pretty much always delighted when the Democratic candidate wins, and there certainly hasn’t been a lot to celebrate on that front for the past eight years. And of course, there’s no denying the cultural and moral significance of Americans’ willingness to elect a black man as President of the United States.

But to me, Barack Obama is symbolic of something much more important and fundamental than either the return of common-sense progressive politics or the possibility of a truly post-racial America. No, the real breakthrough here is that Americans elected a person of relatively humble origins who truly earned every single one of his achievements through the application of intelligence, determination, and personal charisma.

I suppose it could be argued that Bill Clinton was cut from similar cloth with regard to personal biography, but he is a white man. The fact that Obama was able to win the presidency based on his merits despite his ethnic heritage (and notably, one of his parents was not an American citizen, which I think is unprecedented) says something profound about the possibility of our country becoming a true meritocracy.

And all I can say to that is halleluia! When voting, may we now truly measure the content of our politicians’ character rather than the color of their skin or their gender or the depths of their daddies’ pocketbooks or the number of American war heroes they can claim in their ancestry. Because in the end, I don’t care who your parents are or what they did; I want to know who you are and what you will do.

Giddy as I am about the results of the presidential election, however, I am monumentally saddened by my fellow Californians’ vote to overturn the right of same-sex couples to marry. The irony could not be deeper. On the day we broke a hole in the Berlin wall of racial division, we put up another one, affirming our right to discriminate against people who are different from us by a different measure of difference.

In my never to be humble opinion, the campaign against Proposition 8 was shameless in its fear-mongering. Over and over, they warned us that children would be taught about gay marriage against their parents’ religious or moral objections (with the unspoken but obvious implication that our kids are in danger of being recruited to the “dark side” if they find out that same-sex marriage is legal). They told us churches would lose their tax-exempt status or be barred from operating publicly funded charities if they failed to perform same-sex weddings. Most vile though less obviously fear-mongering, they claimed that gay couples have all the rights of marriage because California has a domestic partnership law. Anyone recall Brown v. Board of Education? Separate can never be equal.

And yet, I retain a certain measure of hope and faith. Why? Because, in the deepest irony of all, our children are already comfortable with same-sex marriage. Now, no one polled the <18 crowd (sadly–the measure might have been defeated if they had; ), but people under 30 apparently voted strongly against the ban. (I haven’t been able to find any statistics from exit polls, but if I do, I’ll let you know.) So clearly, our kids have been hearing the message for some time now that homosexuality is not a characteristic on which it’s okay to discriminate, any more than race or gender or eye color or shoe size.

It’s no surprise, either. In my parents’ generation, people rarely revealed their sexuality, and often entered heterosexual marriages solely to foster the impression that they were straight, leading to many an unhappy marriage and more than a few divorces–those are so good for kids. NOT. In my generation (I was born at the tag end of the baby boon), people really started coming out of the closet and tolerance has risen accordingly, although it’s certainly by no means universal.

But in the generations after mine, openly gay people are a fact of life. My kids’ generation has never known a time when homosexuality wasn’t just…there, a natural part of the tapestry of their world. My son and his friends, who are between 11 and 12, were universally unperturbed by the notion of same-sex marriage and also said it wouldn’t affect their choice about whether to marry a man or a woman when they grew up–duh! Would that their parents and parents’ parents were so sensible.

In another thirty years or so, the majority of voters in California and the country as a whole will come from the post-sexual generation (for lack of a better term). Which pretty much guarantees that the march to equality hasn’t been stopped, only delayed. I and many others would have liked to see it come sooner, but justice deferred is, I suppose, better than no justice at all.