As I’ve mentioned before, I’ve decided to follow the self-publishing path for a while and see where it takes me. I am currently writing The Lesson Plan, a novella (about 25,000 words, give or take) that’s related to Grace Under Fire and Taking Liberties, the two stories I sold to Spice Briefs. I’d originally pitched the idea for The Lesson Plan to my editor at Harlequin, but he chose Taking Liberties instead, and I’m rather happy about that because I’m happy to write it free of the pressure to get it in under 15,000 words. Having a little more space to play with is very freeing.

When I put out The Reiver, I had literally NO expectations. I hoped to make back the cost of the cover art. That was it. Through a combination of blind luck and the fact that I picked a great cover artist, the story has now outsold anything I’ve ever published–even, I believe, combined print and digital sales of Behind the Red Door, although of course my numbers on that book’s totals are about six months out of date, so it may be closer than I think–and even managed to get me into the Top 20 in Historical Romance on Amazon for the past few days.

So, as I write this new story, I worry. Because now, I have expectations. This is, after all, a brand new, never-before-released novella. It will be several times longer than The Reiver. I paid more for the cover art (and was happy to do so, because it makes me swoony, lol), and I will be paying for professional editing as well as taking much more time with formatting and validation (simply because it’s longer and has chapter breaks, I MUST spend more time). All of this means I will have more invested upfront, which means there will be more pressure to earn it back.

But more than that, I am more emotionally invested in this story doing well than I ever was in The Reiver. That title’s sales seem like proof of concept in some ways, but what if they aren’t? What if they’re a fluke? What if the people who bought that story have no interest in The Lesson Plan and don’t buy it? What if NO ONE buys it?

The problem with success of any kind is that it doesn’t always breed more success. Sometimes, it just breeds a more spectacular opportunity for failure.

P.S. My target release date for The Lesson Plan is October 25. If I miss it, it’s all on me. Yikes! 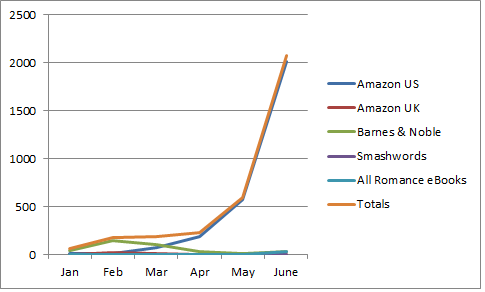