I finished Skin in the Game, the first of two contemporary novels I’ve contracted with Entangled for their Brazen line, earlier this week and sent it to my editor. They have not yet given me a formal release date, though, so I really have no idea when to expect it to be released. If I had to guess, I’d say by April or May at the latest, but really, that’s pure speculation. As soon as I have that information, though, I’ll share it with you. I’m also hoping to get an unedited version of the first chapter up on the website soon.

The second of these novels has a due date of May 1, so I need to get started on it fairly soon. I wrote the cover copy for the story, titled Rules of Possession, right before I went of vacation last week. For me, the process of writing a book almost always begins with coming up with a title, followed by writing the blurb (which tells me what the story is about, more or less), and then writing the actual book. In the case of Rules, I knew who the hero and heroine would be, because they both make appearances in Skin, but I didn’t know exactly what the problem or conflict between them was going to be until I wrote the cover copy paragraphs:

After the car accident that crushed his ankle, pro quarterback Warren Harris isn’t sure he’ll ever walk normally again, let alone play football. Then he meets Rachel Lindsey, a crack physical therapist who’s convinced the problem is more in Warren’s head than his foot. She promises to get him in fighting trim for next season as long as he follows her rules, the first of which is to keep his hands to himself. Unfortunately, that’s going to be a tall order, because the petite, curvaceous brunette pushes every one of Warren’s buttons.

It goes against every rule of professional ethics to get personally involved with a patient, and Rachel won’t break rules, even for a guy she’s lusted after from a distance for years. That is, until a freak late spring blizzard snows them in for a long weekend and the gloves—and everything else—come off. Now Rachel fears she lacks the professional distance to complete his rehabilitation, but Warren is determined to keep her…both in his bed and as his therapist. And he just might win. After all, possession is nine-tenths of the law.

Now, however, I have to do some “percolating,” which for me means visualizing the major scenes and turning points in the story so that I can start writing it. While I’m doing that (which should take me about a month or so), I am hoping to write the third and final Lords of Lancashire novella, A Matter of Indiscretion. This story has been percolating for a while, and it’s the one that makes the most sense for me to finish before I dig into Rules, so my goal is to have it finished and off for editing by January 1. Assuming that happens, it should be out sometime in February. (Um, yeah, I know. Optimism springs eternal.) If I don’t get it to the editor by January 1, then it’s likely that the manuscript will return to the backburner until Rules is finished, which means it won’t be out until summer. (Go, optimistic estimate!)

So the long story, essentially, is that I’ll have something new out before summer. Which book and when, I cannot say. I wish I were better at estimating how long it will take me to write a book, but unfortunately, as with true love, the course of writing a book never did run smooth! 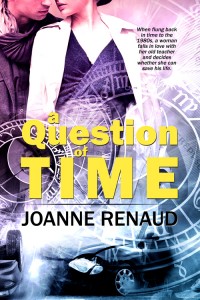 Please welcome Joanne Renaud to the blog. While I’m in the Yucatan peninsula soaking up the sun, climbing Mayan pyramids, and trying not to worry too much about whether the book I just finished sucks, she’ll be here to talk about her new book, A Question of Time. Some of you might remember that Joanne is also a talented artist who has done a number of paintings/illustrations that are going to be used in my redesigned website. I’m delighted to have Joanne here to share her thoughts about history and time travel with you.

Enjoy, and maybe when I get back, I’ll have time to post some pictures and stories from the trip.

A few months ago, a friend in Germany had and I had a friendly disagreement. Over Tweetdeck, we DM’d with each other, arguing good-naturedly about whether the world had changed much since the 1980s. He said no; I said yes. My friend’s reasoning was that we still had rock, we still wore t-shirts and jeans everywhere. There was technology, he said, but the basic fabric of society had not changed.

However, I pointed out that the shifts caused by technology and the end of the Cold War were pretty drastic. The very fact that I was having a conversation on my Macbook with a guy in unified Germany I’d met over Twitter was not something that would have happened in 1982. It has been said that the past in another country; it was very odd to think of my childhood and early adolescence in the 1980s, in a world without the commercial internet, where 16-bit games were the latest and hottest technology, where magazines were still important, and MTV still played music videos of white guys with big hair. I remember my little prepubescent tech-geek self was pretty smug about being able to play the latest games, and wasn’t it such a huge leap from games like Pong from the primitive ’70s! I think of myself when I was twelve, and I feel like an entirely different person, who lived in a completely different world.

So I used to imagine myself in a kind of “Peggy Sue Got Married” scenario. I would imagine myself wandering around in the late ’80s. I can still picture the vast white Miami Vice style lobby of our apartment building, where tons of Omni magazines where put on a huge glass table besides a few potted palms; the sexy robot ladies on the cover seemed both seductive and ominous. I would also picture the “Brass Plum” teen boutique at the local Nordstrom’s, with its prevalence of totally rad music videos and cheap and gaudy polyester clothing. But mostly, I would picture the local library; this was my main hangout because I was total nerd. (Even the librarians knew me.) I loved perusing the bins of records, the VHS tapes, and the mass market and genre fiction. Since I was an aspiring artist even back then, I would spend a lot of time looking at the covers.

I’ve always been fascinated with time travel. I’m not sure if it came from my early love of Back to the Future or Quantum Leap, because I remember being pretty keen on time travel reading classic E. Nesbit and Edward Eager books around 1984 or so. I’ve always liked the idea of different times happening simultaneously; I especially loved the idea that, on the other side of a door, you could be a hundred years in the past, or a hundred years in the future. But for years I just contented myself with historical fiction. The first time I tried my hand at an actual time travel story was back in 2004; the plotting was insanely tricky, though. I put it aside and concentrated on other things.

However, back in 2010, I was stuck in the middle of another one of my epic historical fiction stories, when I got tired of working on something that wouldn’t get finished. I decided to revisit the whole time travel thing, except this time I would use my vaguely “Peggy Sue Got Married” imaginings and set something in the late ’80s. I think I set a land speed record writing the first draft. It took a month. In some ways, it seemed to actually be writing itself.

In Quantum Leap, Sam is always going back to help rescue some lost soul who needs his help. It’s never addressed how all this meddling would eventually screw up the space-time continuum, though I always imagined it would. I still love the show; I imagine it’s had more than a little to do with the fact that one of my favorite plots is a woman rescuing a doomed, beautiful man. However, instead of ‘rewriting the timeline’ idea that you find in both Quantum Leap and the original Back to the Future, I decided to use (obliquely) the alternate timeline theory, which was put forward with eloquent simplicity in Back to the Future II.

“What is the alternate timeline theory?” you may ask. It’s the best way to prevent the grandfather paradox. The grandfather paradox poses the question of what would happen if you went back in time to kill your own grandfather, which causes a paradox (e.g. how can you therefore exist to kill your own grandfather in the first place?). Well, in alternate timeline theory, if I went back in time to kill my own grandpa, I would cause a new timeline to diverge–one where I would not be born. However, since the original timeline where I had been born still existed, that means that the paradox is avoided (and the space-time continuum doesn’t explode around me).

If this confuses you, don’t worry–I go light on time travel theory in A Question of Time. (Though some questions will be answered in the sequel!) My heroine, Celia, finds herself back in 1989 and meets her beloved English teacher, Mr. Forrest, who was killed in a tragic car accident that very year. As she spends a weekend back in the Reagan era, she finds herself falling in love with him. Can she save his life? Or will she be forever lost in time?

The book is available on Amazon, at the Champagne Books store, and at other vendors like All Romance Ebooks and BookStrand. It will be available soon on Barnes and Noble.