I want to know because I’m getting ready to put up PDFs of the excerpts from all my books, and I’m putting some thought into making those excerpts longer in the PDF (with perhaps slightly shorter ones on the actual website pages) to give folks a better flavor for my work before they make the decision to buy (or, more accurately, hope I can hook you in so you can’t resist buying).

What I’m wondering is whether there’s a “sweet spot” for the length of an excerpt. I’ve generally gone with the first chapter, because my chapters tend to run relatively short, but I’m considering (at least in cases where my publishers don’t object) going up to three chapters or perhaps even more when the chapters are short.

So, do you have an opinion on the matter? How much of a story would you like to be able to read before you make the decision to buy (or not)? Please record your response in the poll or, if you have more to say on the subject, leave a comment. And thanks!

My husband took this on Sunday afternoon of our cat, Oreo, snoozing amid the clean laundry. 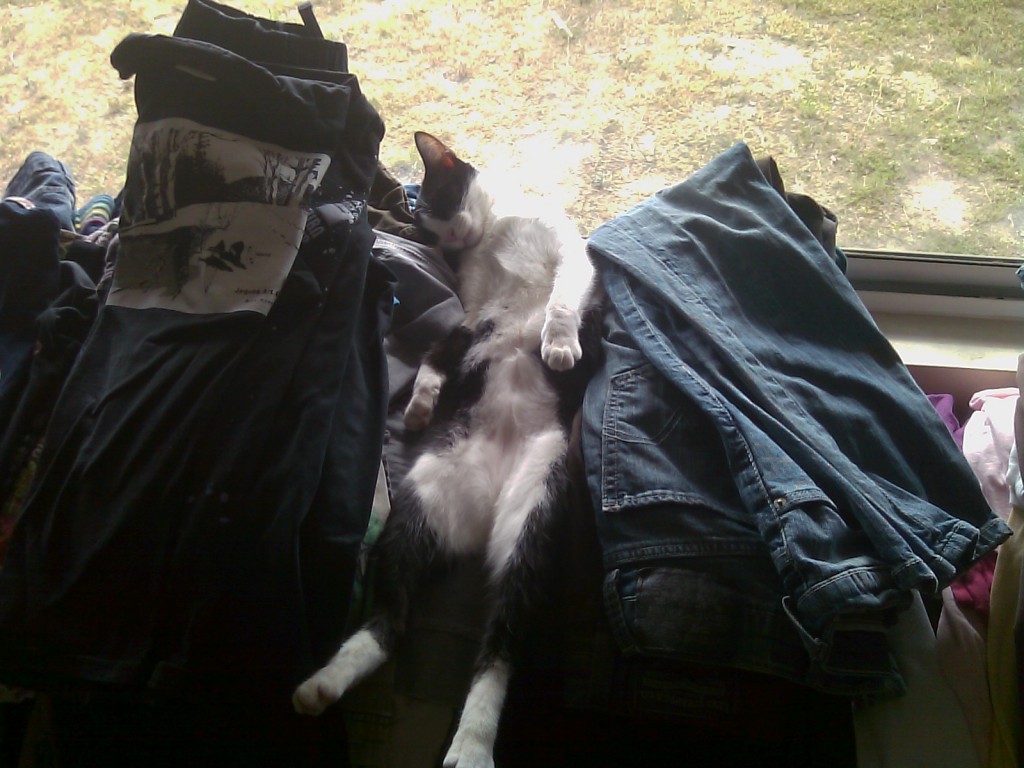 Naturally, I think it demands a LOLCats caption, but I’m not coming up with anything especially clever. So, help me out here.

One lucky captioner (selected at random) will win a $10 gift certificate to the Harlequin ebook store (because, hey, I have to support my new publisher :)).

Although I’m about to set it aside to dig into writing the second short story under my Spice Briefs contract, I’ve been working on a manuscript for the past few weeks that’s giving me fits on the issue of point of view and whether to go with third person or first person narration. Although I’m not going to “reveal” the plot here (because, shhhhh, it’s super secret, lol), I can tell you it’s urban fantasy (ghosts, angels, werewolves, etc.) set in London at the turn of the 20th century. There are romantic elements in the story, but it’s not a romance per se, and I envision at least a three-book series with this heroine as the protagonist.

I started out writing this in third person with the idea that I would tell the story from multiple characters’ POV, but now that I’ve gotten into the story a bit further, I’ve realized that the plot demands that certain information be parceled out to the reader in the same way it’s parceled out to the heroine. Because the other characters know things that I can’t reveal to the reader before the heroine learns them, I really can’t write from multiple characters’ point of view without “spoiling” it. (I suppose in theory I could write the other charactres’ POVs and just not let them reveal anything I don’t want the reader to know, but I am incredibly annoyed by this tactic when I encounter it in other books. If I’m in a character’s head, I want the narrator to share with me any relevant information that character knows, or I feel I’m being manipulated by an untrustworthy narrator.)

Now that I realize I’m going to write the whole book in ONE character’s limited POV (as opposed to multiple POVs and/or omniscient POV), I’m wondering if the narration shouldn’t be first person rather than third person. I can’t remember the last time I read a full-length novel that was narrated in third person from a SINGLE character’s point of view. It seems to me that writing in third person almost demands that the author present multiple points of view.

On the other hand, as much as I like writing (and reading) first person narration, I’m aware that a fair percentage of readers (and editors) dislike first person intensely. Given that I like the voice of the third person narration in the book I’m writing, I don’t want to change to first person just because I’m afraid someone will be annoyed by the lack of other characters’ POVs.

So, that’s my dilemma, and it’s made me really curious how you all feel about point of view and person. I’ve added a little poll below on the subject, but if you have additional thoughts, I’d love to read them in the comments.

P.S. Totally appropos of nothing in this post, I notice that Behind the Red Door is back on sale for the bargain price of $5.58 at Amazon. That’s cheaper than most mass market paperbacks, so this is a good time to buy :)!