So, I just found out that Harlequin is having a nifty ebook special today. If you use the coupon code E5DOLL11 when you check out, you’ll get $5 off your purchase. This means that, if you buy both Grace Under Fire and Taking Liberties, you’ll pay a grand total of just 38 cents.

Of course, this works for a lot of other authors’ books, too, and I’d be remiss if I didn’t say that with this code, you can get Courtney Milan’s Unveiled or Unclaimed for $1.29, any of Victoria Dahl’s contemporaries for between 67 cents and $1.47, and all Laurie B. London’s Sweetblood vampire books for $1.29. You could also buy TWO category novels for less than what you’d normally pay for one.

Such a deal! If you’re an eHarlequin book buyer, today is a great day to scoop up some terrific titles for next to nothing. Enjoy!

Taking Liberties hit the shelves this morning at fine ebook retailers everywhere. I couldn’t possibly give a comprehensive list of links, but here are the ones I was able to find last night before I crashed:

For a chance to win a free copy, hop over to The Season Blog and leave a comment.

Also, in case you haven’t heard, my short story, The Reiver is free almost everywhere now, including Amazon, which picked up the free pricing late Tuesday night. (If you get it from Barnes and Noble, be careful to select the free version, not the 99-cent one. One of the vagaries of distributing through PubIt is that if you take down the PubIt version of a book, the free version that came over from Smashwords is also removed.) 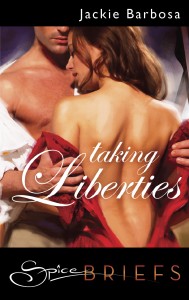 As the post’s title says, I’m over at Limecello’s blog today with a Teaser Tuesday excerpt from Taking Liberties (releasing December 1, available for preorder now at Amazon and B&N). I’m giving away digital copies of The Reiver and/or Carnally Ever After and/or a print copy of Behind the Red Door if you live in the States (please, help me get some of these books off my shelves so I have more room for OTHER writers’ books, lol).

In other news, I’ve managed to figure out how to carve out about an hour of writing time each weekday (not that I always use it wisely, of course!). Despite my penchant for engaging in the Twitter “write-off’s” tagged as #1k1hr (one thousand words in an hour), I’ve never actually managed to write that many words in 60 minutes; I think my record is around 800 words. Still, if I can manage a solid 500 words a day, I should finish The Lesson Plan before Thanksgiving (especially given the help of Veteran’s Day this Friday and vacation the entire week of Thanksgiving) and get it off to my editor. Depending on how long it takes her to get through the edits and me to make the changes and format the files, I anticipate the novella will be out by mid-December.

If you’re in line to receive an eARC, you should be expecting to see it in early December. If you’re not sure you’re on my eARC list and/or know you’re not and would like to review The Lesson Plan, you can either leave a comment on this post letting me know or email me by using the Contact link. I’ll send out eARCs to anyone (I’m not gonna vet you like publishers do on NetGalley), but I do request that you promise to review the novella somewhere, be it a review blog, your personal blog, Goodreads or a retailer site.

I looked at the calendar this morning and, to my shock, realized it’s just 14 days until the release of Grace Under Fire. I’ve had a year to ramp up to this, but somehow, impending releases always manage to take me by surprise.

Anyway, in honor of the two-week pre-release milestone, I hereby bring you 14 sentences of historical, menage-y goodness. Enjoy!

“If it please your lady, I am Mr. Atticus Stilwell, and this,” he continued, standing and gesturing in Sir Blue Eyes’ direction, “is Viscount Colin Fitzgerald.”

Momentarily dumbfounded by this abrupt shift in the tension pervading the small room, Grace could only nod and marvel that, somehow, she had correctly intuited which of them held the title and which did not.

“Colin wishes to ask for your hand in marriage.”

“What?” Her gaze snapped abruptly from Mr. Stilwell to Lord Fitzgerald, and she swayed dizzily when the gentleman nodded his dark head in confirmation. She was so taken aback by this turn of events, she blurted out the first words that came to her mind. “So, I am not about to be ravished, then?”

Mr. Stilwell laughed, a hearty, rolling sound like water at full boil. “Now, now, I never said that.” Grasping her upper arm, he guided her onto the settee, sitting so close beside her that the warmth of his body radiated through the layers of her dress and petticoat right to her skin.

Lord Fitzgerald crossed the floor in two long strides and seated himself on the other side of her. He, too, was hot as a loaf of bread fresh from the oven. “Atticus is right,” he murmured, placing his hand on her thigh. “If you wish to be ravished, we can certainly oblige you.”

I’ve been on pins and needles for what seems like months now to see the cover art for GRACE UNDER FIRE, my upcoming Harlequin Spice Brief (April 1). Today, it came at last and, oh my, was it ever worth the wait. 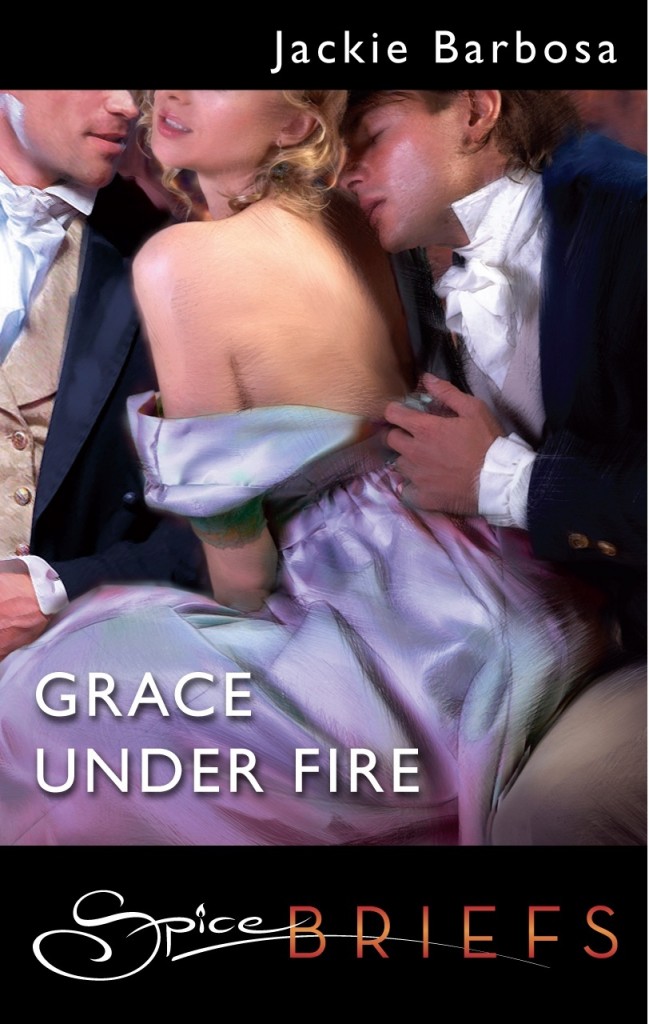 I love everything about this cover. I love the guys in their cravats and waistcoats and coats. I love the heroine’s dress, both the color of it and the way it’s falling away from her torso. And I positively adore the expression on her face; it actually makes me a little weak in the knees.

Harlequin has always impressed me with the quality of the covers they do for their Spice Briefs, and particularly the historical ones. They just look right. I knew whatever they did for my story, it would be gorgeous, but I have to admit that they far exceeded my expectations.

So, my thanks to Harlequin for a beautiful, beautiful cover. Now I think I’ll go upstairs and take a shower. Because this is HOT!

You know the old saying: “Good things come to those who wait.” I think a writer must have dreamed that one up, because it often seems to me no one waits more than writers. Every writer I know is in a perpetual state of waiting, whether it’s waiting for an agent to make an offer of representation, waiting for editors to make offers for publications, waiting for the book to come out, waiting for the sales numbers to come in, and then doing all of it (hopefully less the agent step) all over again. Who knew waiting could be so exhausting?

It’s mildly ironic then that, after what felt like eons of waiting, my latest sale call came a mere ten days after submission. When I picked up the phone and my lovely agent, Kevan Lyon, announced herself, the last thing I was expecting to hear was that the short story we’d submitted to Harlequin Spice Briefs less than two weeks before had received an offer for publication. (Oddly, it also didn’t occur to me that she was calling to tell me we’d had an offer on a proposal we’ve had out for much longer from one of the two houses we hadn’t yet heard from.)

And so, I’m thrilled to announce that Grace Under Fire, will be released in April 2011. Another story, Taking Liberties. will follow.

Here’s the blurb for Grace Under Fire followed by a brief excerpt from the opening pages.

Lady Grace Hannington is the most inaptly named debutante in all of London. Cursed with two left feet, hands that are nothing but thumbs, and a stutter, she’s certain to spend the next five years on the wall and the rest of her life on the shelf. Or so she believes, until her clumsiness pitches her literally into the arms of Lord Colin Fitzgerald and his best friend, Atticus Stilwell.

Colin and Atticus have been inseparable since a shared boyhood tragedy brought them together more than twenty years ago. Though it raises eyebrows, they share everything…including women. This particular quirk has made it all but impossible for Colin, whose title and lands will revert to the crown if he doesn’t have a legitimate heir, to find a respectable lady who’s willing to be his wife.

When a stroke of good fortune—and little intervention from a well-placed foot—gives the two men a golden opportunity to show the lovely and lonely Lady Grace she’s not quite so gauche as she believes, they play it (and her) for all they’re worth. But once she’s discovered her true talents lie not on the dance floor but in the bedroom, Grace must decide whether a scandalous marriage that’s sure to ruin her reputation is what she really wants.

It was a truth universally acknowledged that Lady Grace Hannington was the most inaptly named young lady in all of England, if not all Christendom. Within two months of her debut, she had ruined at least a dozen gowns—none her own—and half as many cravats by spilling tea, wine, or some sort of sauce upon them, trod heavily upon many a gentleman’s slippered toe, and broken the nose of one unfortunate chap with a misplaced elbow during a reel. That list of missteps did not encompass the full measure of the lady’s sheer gracelessness, however, for she was forever nursing some sort of self-inflicted injury, ranging from a sprained wrist and a stubbed toe to this evening’s glorious and ill-concealed black eye.

Atticus Stilwell wondered from his vantage on the opposite side of the crowded ballroom how she had come by that shiner. Not that it mattered. With or without the swollen, bluish-purple tinge beneath her eye, she was by far the loveliest woman in the room. Oh, perhaps not in the classic sense of a delicate English rose, but then, she stood a head taller than any other lady in the room—and fully half the men—and her hair was an entirely too flamboyant shade of red for traditional beauty.

In fact, everything about her was lush and flamboyant, from the blazing color of her unruly curls to the ripe red of her too-wide lips to the plump mounds of her generous tits. Though he could only guess at what lay beneath the loose folds of her high-waisted gown, he imagined a slender waist curving into broad but perfectly proportioned hips and from there into shapely legs that would go on forever. Though she was consigned by her ungainliness on the dance floor—and nearly everywhere else—to the role of a perpetual wallflower at Society events, Atticus saw the woman she could blossom into if only she were freed from the expectations of fashion and propriety.

A woman who was more than enough for not one man, but two.