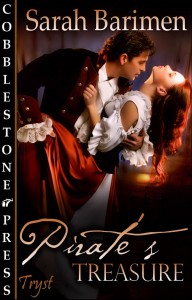 I’m thrilled today to introduce you all to my dear friend, Sarah Barimen, who has recently joined the ranks of Cobblestone Press with her short story, Pirate’s Treasure. (Is that cover gorgeous or what? I swear, I’m still drooling…and envious!) Sarah’s story won’t be released for a couple of months, but in the meantime, I wanted to tell the story of how we became friends (more than a decade ago) and how excited I am to have had a hand (however small) in her road to publication.

Sarah and I “met” on Usenet in 1997. Does anyone else remember Usenet and newsgroups? Nowadays, all those newsgroups have pretty much moved to Google Groups and most people probably access them on the web, but back in the day, we used to set up our email clients to download newsgroup messages. Sarah and I were both new moms at the time, and so we frequented the newsgroups misc.kids, misc.kids.pregnancy, and misc.kids.breastfeeding. As time went on and we each went through two more pregnancies, we became very good friends both on and off the newsgroup.

When I left the parenting newsgroup world back in about 2006 to pursue writing seriously (I couldn’t spend all that time on newsgroups AND write, after all), Sarah and I kind of lost touch. Then, a few months ago, she contacted me and we connected on Twitter and Facebook. And lo and behold, I came to find out that Sarah was writing. At the time, she was working on an urban fantasy, but a couple of months ago, she sent me the short erotic story that ultimately became Pirate’s Treasure. I thought it was very, very good and worthy of publication, and suggested she submit it to Cobblestone Press, which I knew would take manuscripts of a shorter length than many epublishers. After a few weeks and some revisions, Sarah was offered a contract! Needless to say, I was delighted for her.

So, what’s Pirate’s Treasure about? Well, here’s the blurb to whet your appetite:

Miriam Van Vorce, traveling with her older sister to a new life on a Caribbean island, makes the trade of a lifetime when her ship is looted and burned by pirates: she gives her own virtue in exchange for her sister’s safe delivery to her betrothed for a wealthy arranged marriage.

She believes she has sacrificed any hope of happiness of her own, and she is resigned, but in reality she will gain far more than she ever dreamed: love, ecstacy, and a richly independent life of her own.

I hope you’ll all be looking for Sarah’s story when it’s released. I loved it, and I hope you will, too!