So, everyone’s been posting their “best reads” lists for the year. I kept putting mine off because I hoped to finish a couple more before the end of 2010 so they could be included on this list. Alas, it’s only five days until the end of the year and I am 99.9% sure I am not going to finish any more books before then. So, without further ado, in no particular order, here are my favorite books of 2010. (No, it’s not a top ten list. It’s a top eight list. That’s not because there couldn’t have BEEN ten I liked enough to mention, but because I’m a slow reader and there are still a LOT of unread 2010 books in my TBR pile!)

I also have a ringer list of a few books pubbed before 2010 that I read this year and wish I’d read long ago:

Next month, I have my first new release in almost 18 months. It’s a short story called The Reiver in the Mammoth Book of Scottish Romance. It’s available only in print and has a release date of January 4, although I know sometimes book stores begin stocking a week before the hard release date. (You know, just in case you’re DYING to get your hands on it!)

Now, as you can see from the beautiful cover displayed on the right side of the screen, this is a multi-author anthology that includes stories by the likes of Connie Brockway, Jacquie D’Alessandro, Anne Gracie, and Julianne MacLean. I’m thrilled and flattered to have been invited to participate, and I really enjoyed writing my story. I’m also looking forward to read the other stories in this anthology, and thanks to the fact that I received my two author copies in the mail today, now I can!

That said, I have a complicated relationship with anthologies in general and multi-author anthologies in particular. Obviously, I don’t object to anthologies, or I wouldn’t have written Behind the Red Door, which is a collection of connected novellas, nor would I have written for this anthology. But I have to admit that I find actually reading multi-author anthologies to be a bit jarring. Even when I like the majority of the stories, the abrupt shift from one author’s voice to another throws me out of my reading rhythm. As a result, I often find I read only the stories in an anthology that are written by the authors whose work I’m familiar with and know I tend to enjoy.

This, in turn, leads me not to BUY very many multi-author anthologies–unless I am acquainted with the work of the majority of the authors in it–because I know I’ll only read a fraction of the total pages. And that’s too bad, really, since one of the great things about a multi-author anthology is the possibility of discovering a “new-to-you” author you really love and then glomming her (or his) backlist.

So, what about you? How do you feel about multi-author anthologies? Do you actively seek them out or avoid them? If you do seek them out, is it because they contain a story by a particular beloved author or because you’re hoping to find that “gem”? Inquiring minds (and anthology authors everywhere) want to know!

The RomanceLandia Twittersphere has been awash with conversations related to this article that appeared in Tuesday’s New York Times: Lusty Tales and Hot Sales: Romance E-Books Thrive. Jessica over at Read, React Review was irritated by the article’s comparison of romance readers to “insatiable carp” while others felt that the article largely put a positive spin on the romance genre and readers.

I have to admit, the insatiable carp thing didn’t bother me all that much. I have always been a pretty insatiable reader in every genre, so the fact that it was applied to romance didn’t stick out at me. What did stick out for me was the emphasis the article placed on the fact that ereaders allow romance devotees to read their books in public without everyone else knowing what they were reading by the cover. This quote, in particular, rubbed me the wrong way:

“It’s easier to check out some naughty little title online than in a brick-and-mortar store where your pastor could step up in line behind you,” said Barb Perfetti, the chief financial officer of All Romance. “We’ve had lots of customers write to us and say, ‘Now I don’t always have to show my husband what I’m reading.’ ”

Several things about this bothered me. I’m the first to admit that romance titles and covers can often be over-the-top in emphasizing the sexiness (aka naughtiness) of the content, but I’m bothered by the implication that readers have something to be ashamed of in choosing books that might have sex in them. More importantly, the fact that so many women apparently feel that they have to hide their romance reading habits from their husbands just…made me throw up a little in my mouth. Aside from anything it says about people’s perceptions of the romance genre, I guess it explains to me why so many married women READ it–they apparently don’t have much romance in their day-to-day lives with men like that as husbands!

Anyway, when I mentioned this on Twitter, I got sucked into a long and very difficult to maintain conversation on the subject of romance covers, primarily with redrobinreader, GrowlyCub, and jodywallace. After a while, it became pretty clear that I couldn’t entirely express my conflicting feelings about the “romance novel cover code” in 140 characters…hence this point.

So, in the interest of full disclosure, let me admit that I used to be among those who hated the “clinch” covers and was embarrassed to be seen in public with any book that “looked like” a romance novel. I was afraid that people seeing me would judge ME by the cover of my book. They would look at that embracing, half-undressed couple and think, “Oh, it’s one of THOSE books.” And by “those,” I mean books with–gasp!–sex in them. It wasn’t the cover art, per se, that embarrassed me. I was, in my heart of hearts, embarrassed to bee seen reading romance novels with–gasp!–sex in them.

Now that I’m an author (albeit an exceedingly small-time one) and have had so much more opportunity to interact with other romance writers and readers, I’ve changed my opinion somewhat. When I first saw the cover art for Behind the Red Door, I was thrilled with it. I thought the colors were eye-catching and beautiful, the models attractive and reasonably historical in appearance, and their pose both romantic and sexy. The cover, in other words, signaled that the book was a romance and a steamy one at that. From a perspective of ensuring that readers who like hot historical romances would be able to identify it as a book they might like, it was perfect. In other words, it had all the right elements of the “code” for a romance novel cover.

There are other questions as well. Do romance readers respond to (i.e., buy) romances with sexy cover art because that’s the only choice do they have? If the covers of most romance novels were more like the covers shown below (all of which were suggested during our Twitter conversation as potential “models” for changing the code), would readers be able to distinguish their romances from other genres? 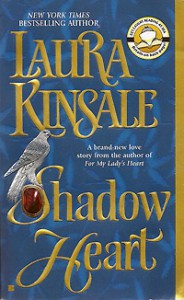 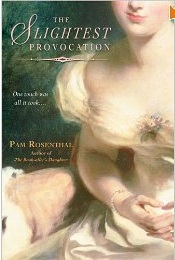 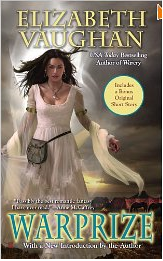 Now, these are all beautiful covers, but I have to admit, I’m fully dependent on the established code, for better or worse, and here’s what these covers say to me:

In other words, if I’m looking for a steamy historical romance (which is the type of book I prefer), none of these covers would immediately strike me as what I was looking for, including the one that actually provide is. Now, here are some covers that I think are equally as beautiful from an aesthetic point of view as those above, but involve the apparently much-dreaded clinch: 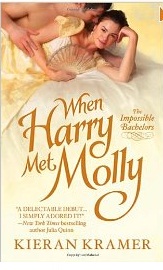 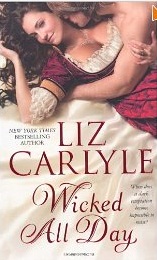 So it’s not, IMO, about romance novel covers being ugly/unattractive (although some certainly are!), but about the fact that they say to everyone in the world, “Hello, I’m a romance novel.” And…so what? I think if you’re embarrassed that the cover of your book tells people it’s a romance, you’re embarrassed to be “caught” reading a romance because, on some level, you feel there’s something “wrong” with them. Lest you think I point the finger at others, I turn it and point it squarely at myself. I used to be one of those readers.

But now I’m happy to say, loudly and proudly, that I read and write romance–books about people who fall in love, with or without sex on the page, and live happily ever after. I’m not going to apologize for that. And I don’t need publishers to revamp the cover art code I’ve come to depend on and even appreciate merely to “hide” my romance habit.