SKIN IN THE GAME is OUT! Here’s your third and final teaser.

“Penny for your thoughts.”

Angie’s stomach collided with her heart at the sound of Cade’s husky voice near her ear. She opened her eyes and turned her head to find him leaning against the yellow school bus beside her, his right arm mere inches from her left.

How had he managed to sneak up on her like that? Her body seemed to have radar when it came to him—she could normally sense his presence when he was within a football field’s distance, let alone a matter of inches. Why had that sixth sense chosen this particular moment to desert her?

Her pulse beat thick and heavy in her throat and between her thighs, but she somehow managed to keep her wits—and her resentments—about her. “I’m sure you can afford to pay more than that. And shouldn’t you still be up there on the field, attending to your adoring public?”

He grinned and shook his head. “Not when I have a shot at being adored in private.”

Angie’s midsection went molten and dangerous with temptation. Maybe she should stop resisting the attraction between them. Maybe if she had sex with him a few more times, she could work him out of her system.

Except she knew the only thing that came from feeding an addiction was an even deeper addiction.

“So, at least I finally get to see what I missed the other morning,” Cade murmured.

Angie eyed him balefully over the rim of her coffee cup as she took a fortifying swallow. “Well, feel free to leave now that you’ve satisfied your curiosity.”

Shaking his head, he patted the playbook. “I really did come to go over this. I didn’t expect to find you still in bed at nine o’clock in the morning. But I can’t say I’m sorry I did. You look…wonderful.”

“I think you look sleepy and rumpled and desperately in need of kissing.”

“You have to stop that,” she snapped. Because all of it was true. As irritated and unsettled as she was by his presence, her lips felt heavy and swollen with need.

“Why?” At first, she thought he was pulling her leg, but then she realized the question was absolutely genuine. He really didn’t see a conflict.

“Because you’re my boss. You can’t just come to my house first thing on a Saturday morning and hit on me while I’m still in my pajamas.”

“Well, you could always take them off,” he suggested, waggling his eyebrows.

“On the contrary, when it comes to you, I’m willing to be very, very possible.” 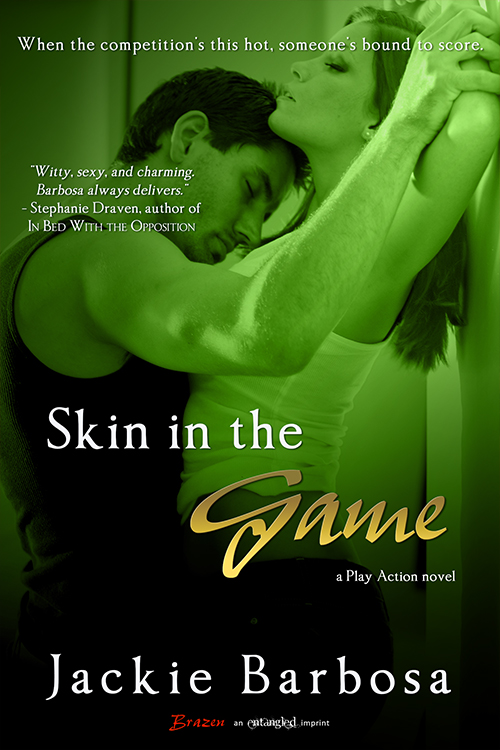 In anticipation of SKIN IN THE GAME’s release on Monday, I’ll be posting an excerpt today,tomorrow, and Monday. Here’s today’s snippet:

Now he was really at a loss. “Was what worth what?”

“Getting me into bed the other night so you could have a good laugh at my expense today?”

He recoiled as if she’d slapped him. “What?”

“Oh, come on. You can’t expect me to believe you didn’t know exactly who I was when we ran into each other in that coffee shop. It must have been very amusing, pretending you didn’t know me, pretending to find me attractive…” Her voice hitched, and she trailed off. “Oh, just forget it.” She started away from him again.

Cade felt as if he’d been standing in a pitch-black room and someone had just switched on the light. Blinded. Or maybe more accurately, blindsided. That was the last accusation he’d expected.

He grabbed her wrist to prevent her from getting away. She glared over her shoulder at him and yanked, but he made up the space between them in three easy strides. There were times when being six foot five was a definite advantage. Especially now, when she was wearing a sensible pair of flats and he had a good six inches on her.

“I had no idea who you were until I talked to Coach this morning and put it together. And if you think I was pretending last night, you must also think I’m one hell of an actor.”

I’m giving away a Kindle Paperwhite to celebrate the release of Skin in the Game. To be eligible to win, you need to sign up for my newsletter and like my Facebook page. You can increase the number of chances to win by also adding Skin in the Game to your Goodreads shelf, tweeting about the contest, and following me on Twitter. Here’s the widget to enter. Good luck!