Today’s guest author interview is with Candace Havens, author of numerous books including Charmed & Dangerous, Charmed & Deadly, The Demon King and I, and her latest, Dragons Prefer Blondes. She’s also the inventor of the Fast Draft writing method and just an all-around real nice gal! Please make her feel welcome. 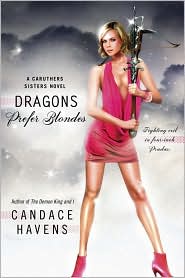 Jackie: Your upcoming release, Dragons Prefer Blondes, is the second installment in a series that began with The Demon King and I (love that title, by the way). Can you tell us a little bit about how the idea for the series came to you, as well as a little about both the books thus far?

The idea for the series came about in kind of a funny way. The very first book I wrote was about these four wealthy sisters who had cool powers. I wrote that book in about two weeks and then stuck it in a drawer. My second book, Charmed & Dangerous sold, and I was busy with that series for a few years. Then one morning I woke up and I figured out how to make that first book work. I laugh because the only thing that is the same in The Demon King and I, from that first draft, are the names of the sisters. Everything else is different. 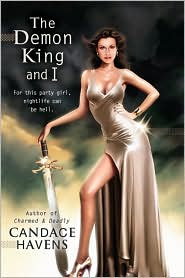 The series is about these four sisters who the rest of the world sees as successful, wealthy heiresses. What they don’t know is that they are also Guardian Keys, who protect our world from other worlds. The Demon King and I was about Gillian, a lawyer and art gallery owner, who ends up falling for the one guy she should hate the most — Arath, the king of the demons. While, she’s trying to deal with the fallout from that relationship, she’s also trying to save the world from some nastiness.

Dragons Prefer Blondes, focuses on the dragon slaying Alex, who is chosen by a dragon warrior, Ginjin, to be his mate. She’s not so cool with this, and begs the head of Caruthers security, Jake, to be her pretend boyfriend. What she doesn’t realize is that she has big time feelings for Jake, which come to the surface as they spend more time together. She’s also kind of busy trying to find out why the dragons are drugging and kidnapping humans.

Jackie: Before I go any further, can I just say how much I love the titles of the Charmed series? So clever, they jump right out at you. And I’m a firm believer that titles do matter when it comes to sales, both to editors and to readers when the book is on the shelves.

One of the things I often wonder is how other authors arrive at their titles/book ideas. Often, for me, a book idea starts not with a plot or characters, but with the title. The title then suggests the premise for the book and then I think up the characters and plot.

How does it work for you? 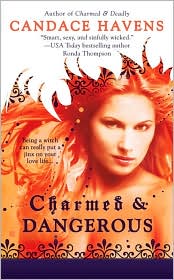 You are going to be very disappointed when I tell you that I have never once come up with a title for one of my books. I mean, I come up with titles but my publisher never uses them. The editor who bought Charmed & Dangerous said, “I love everything about this book and I’m not changing a thing – except the title!” I’d been calling it the Witches’ Diaries before that. I’m supposed to come with a title for my Harlequin release and it’s freaking me out. My editors have always come up with my titles, until now.

Jackie: No, not disappointed at all. I think a lot of authors (if not all) have a hard time coming up with titles for their books.

The other thing you mentioned earlier is that you wrote the original draft of The Demon King and I in two weeks. I have to tell you, the very idea of that makes me breathless and dizzy. I know you’re pretty famous for your “Fast Draft” method of writing books. I tried it once, actually, but it didn’t work for me, primarily I think because I don’t tend to have the scenes in a book thought out quickly enough that I can write that many pages in a day.

Anyway, that fact makes me wonder how you write–plot or pants or somewhere in between? I’m definitely in the somewhere in between category, which I think slows me down. I think if I were totally plot or totally pants, I could be faster, lol, so I’m curious where you fall on the spectrum as someone who also writes very fast.

I’m a pantser, though I usually have a brief synopsis to please my editors who have bought the book.

I can almost guarantee you that Fast Draft didn’t work because of that nasty internal editor. When you can let that nasty hell witch go, and let your subconscious take over, magic happens. I’ve worked with thousands of writers through the years, and the process has worked for them. But the key is learning to let go and let the words fall out of your head where they may. (smile) I never know what’s going to happen next, and I’m always surprised when I have the finished product.

Jackie: I do have a pretty nasty internal editor, which I freely admit, although I’m not sure it’s a complete disadvantage since I don’t tend to need to do much revising. My first draft and my final draft are not much different from each other.

So, as a pantser, how hard is it to write a synopsis for those pesky editors? And how much does your final draft resemble that synopsis?

It’s really tough for me to write a synopsis. I’d almost rather write an entire book. Seriously. It’s one of my least favorite things about writing. I usually have the who, what, where, when and why, correct, but everything else about that synopsis as far as plot lines and characterizations usually changes by the time I finish the book. Though, this last book for Harlequin, I was much closer than I’d ever been before.

Jackie: So, enough “shop” talk. Tell us a little about Alex, the heroine of Dragons Prefer Blondes. She’s a dragon-slayer, but there must be some history to that role.

The rest of the world thinks Alex is this wealthy entrepreneur who has some of the hottest clubs all over the world. They have no idea she’s a Guardian Key who protects us from nasty dragons. She’s an excellent fighter and doesn’t take crap off of anyone, but there’s also a softer side to her. She has a habit of picking up stray people, who need a second chance. She helps them to rebuild their lives. You also get to see a funny side of her as she helps a friend plan a wedding. She’s trying to save our world from the dragons, find out who is attacking the people who work for her, and at the same time plan this crazy woman’s wedding. I love Alex, and I would totally hang out with her.

Jackie: Alex sounds like a kick. I’ll bet it was great fun spending time with her while you were writing the book.

What about your hero, Jake? What makes him Alex’s perfect match?

Okay, I’m going to be honest here. Jake is my dream man. From head to toe, he is exactly what I would want in a man, strong but vulnerable, sexy and sweet, kind but tough. He loves Alex, and she’s not exactly easy to love, but he doesn’t take any crap off her. He’s the one guy who can stand up to her, and she doesn’t cut his head off. She might want to at times, but she respects him too. He heads up Caruther’s security, and has the unenviable task of keeping Alex safe. She doesn’t make it easy.

Well, I’m sold. Doesn’t Dragons Prefer Blondes sound great?
Candace is doing a 100-blog tour and there are prizes to be had, so please go check out her website for more information! Thanks to Candace for graciously chatting with me about her writing and her books.