I’ve been working on Incarnate this week, trying to get through the first act (my books generally lay out in thirds, like a play). In honor of Six Sentence Sunday, here’s a snippet from Chapter Four: 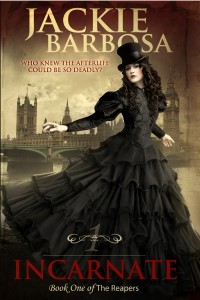 As though sensing its impending doom, the chicken emitted a plaintive squawk from its small wire cage as Elodie passed through the old Victoria Park Cemetery gate and into Meath Gardens.

“I don’t like this any better than you do,” she muttered. Once every six to eight days for fifty two years, and she still hadn’t got used to this part of being an incarnate ghost.

The clock must be nearing half-nine now, as the sky had passed from golden pink to inky purple. Soon, the last few visitors would straggle out of Meath Gardens and into the night. Although the grounds had not been an active cemetery for a very long time, most people were superstitious enough not to hang round the place after dark and those who did were generally insensate enough with drink or opium or both not to notice a plain, petite woman in black pouring the blood of a freshly butchered chicken into the ground over one of the gravesites.

Also, in case you missed it, the entire first chapter is now here.